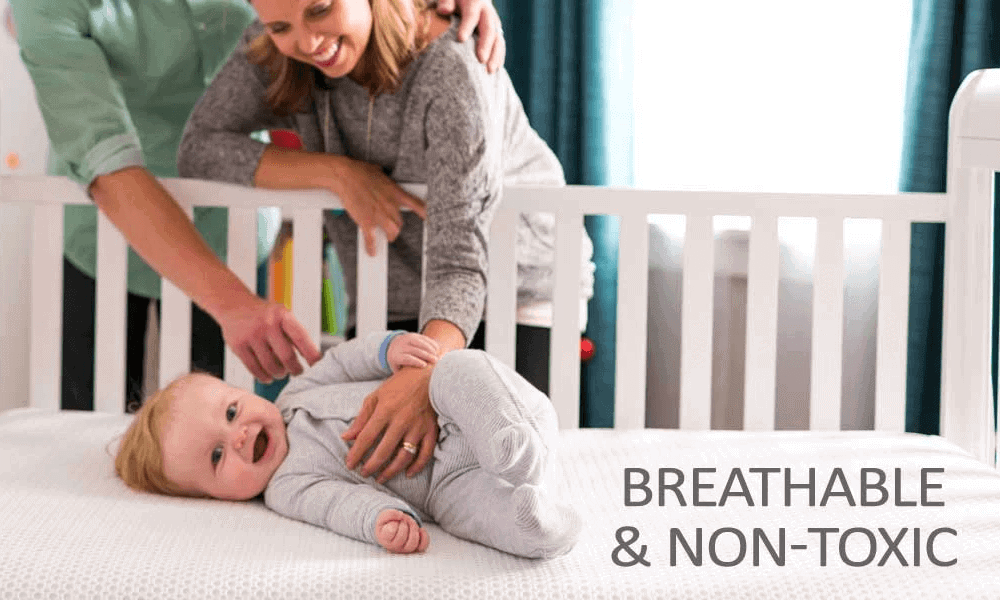 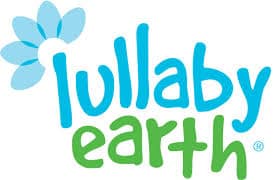 Lullaby Earth crib mattresses were designed by parents, grandparents, and engineers focused on creating the safest baby crib mattress possible. The company was founded based on its top priorities of safety and affordability. In 2014, the company pioneered enhanced breathability when it introduced the Breeze crib mattress. This design retained key safety features while adding a breathable mattress pad that maximizes airflow between the infant and his or her mattress. This feature helps dissipate moisture and heat for more comfortable sleep.

Here’s an in-depth look at the mattresses offered by Lullaby Earth:

Each of the three models offered by Lullaby Earth is relatively similar in terms of the materials and construction. The main difference is that the Breeze Air model is 2-stage, and you have the option of adding on the 2-state feature on the Healthy Support model. The Breeze Air Mini does not boast a 2-stage feature for both infants and toddlers.

Lullaby Earth manufactures all its mattresses in the United States using superior materials. Each mattress boasts food-grade polyethylene and polyester, both of which are safe and eco-friendly. Unlike competing mattress brands, Lullaby Earth does not use materials containing toxins or allergens, such as formaldehyde and perfluorinated compounds. And most importantly, Lullaby Earth eliminated all flame retardant agents from its mattresses.

Crib mattresses are not as complex as traditional memory foam mattresses when it comes to the number of layers. Lullaby Earth’s mattresses have a breathable cover as the outermost layer and a firm core layer right below it.

Doubling as a safety and hygienic feature, the breathable cover tightly encapsulates the mattress and is sold either with the mattress or as a stand-alone product. This cover promotes airflow with its 3-dimensional fabric – a feature that helps reduce the risk of SIDS. Furthermore, the breathable cover is washable and has an extra layer of protection that prevents urine or spit from seeping into the mattress. The maximization of airflow will not only keep your little one comfortable during the night, but it also lessens the chance of overheating.

If your baby were to shift positions during the night and end up facing down, he or she would still be able to breathe through Lullaby Earth’s innovative cover. The company designed the cover with science in mind, using breathability tests by independent labs to back its product development.

The core of Lullaby Earth Crib Mattresses boasts a WaveSupport that meets guidelines set forth by the Consumer Product Safety Commission and pediatricians. The WaveSupport design has a firm and flat surface that promotes safe sleep. At roughly 7 lbs., the main layer of the mattress is durable without the heavy weight load that often comes with it. Lullaby Earth designed all its mattresses with square corners to ensure that they fit securely and snugly into the crib.

Unlike traditional mattresses, most crib mattresses don’t have a standard base layer. This holds true for the Lullaby Earth Crib Mattresses. Instead of a special support layer, the mattress has a polyester fiberfill that helps the mattress retain its shape. The Breeze Air model is 2-stage (and this is also an optional feature for the Healthy Support model). A 2-stage mattress has a firmer side for infants and then a softer side for toddlers. This feature allows your child to grow into his or her mattress, without having to replace the mattress every year or two.

Lullaby Earth designs its mattress using safety as one of the key principles of design. As suggested by the Consumer Product Safety Commission, infants should sleep on a firm mattress. The inner-core of their mattresses has WaveSupport material that keeps the mattresses from sagging. In addition to the WaveSupport feature, the mattresses boast reinforced edge support that supports the movement of bouncing toddlers.

While Lullaby Earth does not directly mention the sinkage in its mattresses, customer reviews indicate that the mattresses hold their shape and do not sink over time. According to customers, the mattress can even support toddlers bouncing on it and the weight of a grown adult. Since this is a firm mattress, your infant or toddler won’t sink into the mattress like a plush one. 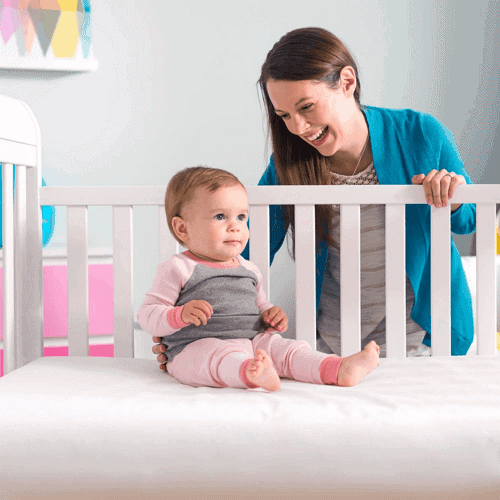 Aside from the construction and price of the Lullaby Earth Crib Mattress, you should also consider the return policy, warranty, trial period, and various other factors that could influence your decision.

If you purchase directly from Lullaby Earth, each product comes with a 30-day money-back guarantee and free shipping if you reside within the Continental United States. Customers who live in Canada, Hawaii, or Alaska are responsible for the return shipping charges. If you purchase a product from somewhere other than Lullaby Earth directly, the return policy of the retailer you bought from will apply.

Lullaby Earth offers a lifetime limited warranty on all their products, which really makes the company stand out compared to its competitors. You must be the original owner of the mattress for it to be valid. The warranty will replace your mattress if it’s found to be defective due to flaws in the material or workmanship. If such a flaw is found, Lullaby Earth will either replace or repair the product, or compensate you for a portion of the purchase price. If you’re using the mattress in a commercial setting, such as a daycare, the warranty is only valid for five years.  Stains, normal wear and tear, and discoloration are not covered by the warranty.

Unfortunately, Lullaby Earth does not offer a free trial with its crib mattresses. However, the 30-day money-back guarantee policy does make up for that. If your little one isn’t satisfied with the mattress, you won’t be out of any money.

Lullaby Earth covers the entire cost of shipping and handling. The company sends out all packages via FedEx Ground shipping, which typically takes anywhere between one to seven business days depending on your location from the point of shipment. If you don’t purchase directly from Lullaby Earth, there are several other retailers that offer free shipping, such as Amazon and Target. 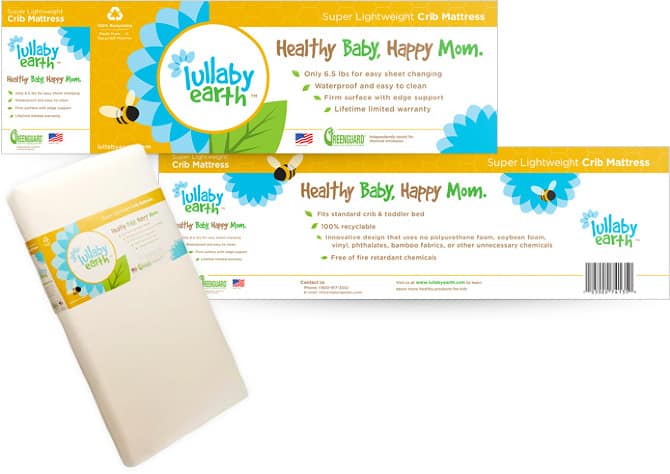 The Lullaby Earth Crib mattress meets or surpasses strict chemical emissions standard as specified by the Greenguard Gold Certified program. It is also tested to meet or surpass regulatory safety standards issued by the United States Product Safety Commission, the Canadian Cribs and Cradles Regulations, and the American Society of Testing Manufacturers. The waterproof vinyl exterior of the mattress meets food contact standards, and the mattress contains no harmful chemicals or allergens.

If any questions arise with your mattress, Lullaby Earth Crib offers responsive customer support. Its website boasts a contact form, but if you need immediate assistance, you can call their support hotline that operates Monday through Friday during normal business hours. If you purchase a crib mattress from another retailer, you may need to contact them directly.

Since each mattress fits the size of a standard full-length or mini crib, they are very portable and easy to bring with you while you’re on-the-go. However, due to the thickness and height of the mattresses, you cannot roll or fold them.

All the Lullaby Earth Crib Mattresses have a 4-star or higher rating on Amazon, with hundreds of positive reviews. In a nutshell, consumers are very comfortable with the durability of the mattress – the fact that it can be used for years without showing marks or indentations. In addition, customers are very pleased with the waterproof material used in the construction of the mattress. They noted that because of the waterproof material, they did not have to use liners and they could easily wipe clean any accidents.
There are very few negative reviews left on any of Lullaby Earth’s various mattress models. A small handful of reviewers noted that there were signs of slight sinkage after a short period of use. On the other hand, many reviewers say the mattresses do not sink, so these situations could be anomalies. 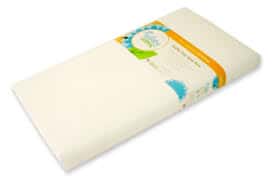 The Lullaby Earth Crib mattress has a durable reinforced seam as well as strong fabric bindings that provide long-lasting performance. This lightweight crib mattress weighs only seven pounds, comes with a limited lifetime warranty and is made in the United States. With square corners, this mattress is easy to handle for frequent sheet changing. The flat surface, along with strong edge support, gives it a safe and snug fit in the crib. It measures 52 inches long by 27.5 inches wide by 6 inches in height.

With its innovative two-in-one design, this mattress has a firm side for infants and a foam-cushioned side for toddlers. The easy-to-clean vinyl mattress displays white stars and moons on the light blue infant side as well as multi-colored stars and moons on the toddler side. All foams used are CertiPUR-US certified. This means that these foams do not contain PBDE flame retardants, lead, PVC, phthalates, perfluorinated compounds (PFCs), formaldehyde, mercury, and other heavy metals.

The Lullaby Earth Crib might be too firm for some babies and toddlers. In addition to the firmness level, a small handful of reviewers mentioned that the mattress did sink over time.

Multiple parent magazines and baby-related web sites have reviewed the best crib mattresses. Check out this parent’s guide or this expectant mother’s guide as a few places to start. The Lullaby Earth crib mattress is the lowest price in its category, making it an affordable choice for new parents. 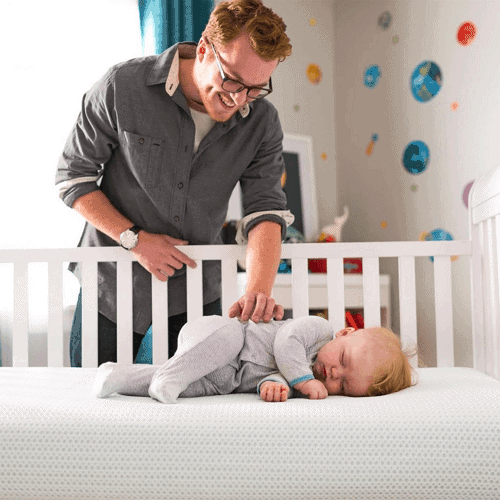 Should I Buy A Lullaby Earth Crib Mattress?

If you’re looking for an eco-friendly and safe crib mattress, then the models sold by Lullaby Earth Crib Mattresses would certainly meet your needs. The team at Lullaby Earth takes special measures to ensure that their mattresses are made with materials that are long-lasting and free from toxins and allergens. Furthermore, they carefully designed their mattresses in such a way that they fit securely in standard-size cribs. The certifications backing the mattresses, such as GREENGUARD® Gold, reassure that they adhere to government regulations and that they have undergone rigorous testing.

We know that the feedback from other parents will play a significant role in your purchase. Many reviews from parents are very positive – they are very content with the quality, durability, and cleanliness of the mattress. As noted, each mattress holds an average rating between four and five stars. Given the amount of positive feedback left for this mattress, you can feel confident that you’re purchasing a safe and dependable crib mattress for your infant or toddler.

There are undoubtedly cheaper crib mattresses on the market – so, why Lullaby Earth? Well, cheaper options don’t often hold as many certifications and recommendations as do the Lullaby Earth Mattresses. For example, both The National Parenting Center and The American Sustainable Business Council have recommended Lullaby Earth mattresses. You also must consider the value-added from the warranty. Lullaby Earth offers a lifetime warranty, whereas competing brands might only offer a fix (i.e. one-year) warranty. In fact, you may have to pay extra to extend the warranty on a competing crib mattress.

At the end of the day, an investment starting at $169 is well worth it if it helps keep your child safe. Not only that, but you will have peace of mind knowing that you are buying from a reputable company that uses research-backed tests in its product development and manufacturers its mattress with safety as one of the top priorities. Whether you’re a new parent or just looking to replace an unfit crib mattress, Lullaby Earth offers three mattress options (The Healthy Support, Breeze Air, and Breeze Air Mini) that will not only keep your little one safe and comfortable but will also make your life easier as a parent.

You must be logged in to submit a review.